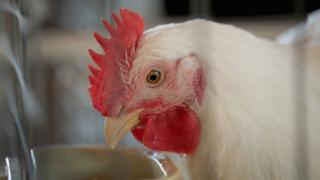 A federal grand jury in Colorado has charged four executives from two US poultry companies with conspiracy for chicken price-fixing.

The leaders of the Pilgrim’s Pride and Claxton Poultry companies were indicted on Wednesday for a years-long plot to rig bids and elevate costs.

Prosecutors say they worked to raise prices for chicken sold to restaurants and stores from at least 2012 to 2017.

The case stems from a Justice department antitrust investigation into anticompetitive conduct in the poultry industry.

Pilgrim’s CEO Jayson Penn and former vice-president Roger Austin, along with Claxton president Mikell Fries and vice-president Scott Brady are now the first to be charged in the agency’s price fixing investigation.

Pilgrim’s Pride is one of the largest chicken producers in the US, taking in more than 17% of the American consumer poultry market.

The companies have not yet answered BBC’s request for comment.

“Executives who cheat American consumers, restaurateurs, and grocers, and compromise the integrity of our food supply, will be held responsible for their actions.”

The $1m fine the businessmen face may be increased based on the gains seen from the crime or the losses suffered by the victims. The indictment also suggests there may be other individuals involved.

The $28bn US broiler chicken industry – chickens raised for meat – has faced price inflation accusations before. In 2016, Pilgrim’s, along with other major companies like Tyson Foods and Perdue Farms, were sued by restaurants and buyers.

The poultry producing companies said prices rose due to supply and demand factors.

Rival poultry producers Tyson Foods and Sanderson Farms are also part of the Justice department investigation. Both have denied the allegations of wrongdoing.