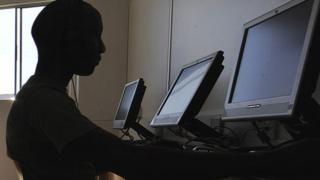 An American woman lured to Nigeria by a promise of marriage from a man she met on Facebook has been rescued after being held captive for more than a year, police say.

The 46-year-old was held against her will in a hotel room in Lagos.

The suspect Chukwuebuka Obiaku, 34, “took control” of the unnamed victim’s credit and debit cards, and retirement benefits, according to the police.

The victim is a retired civil servant from Washington DC.

Police say Mr Obiaku “also used the victim as a front to defraud her associates and other foreign personalities and companies”.

What more do we know?

The victim arrived from the US in February 2019, according to Nigerian police. In May 2019 she married Mr Obiaku.

In total, the woman is said to have been held against her will for 16 months in a hotel room.

The police say they received a tip off from a “civic minded” individual and they used the information to rescue her.

Mr Obiaku has been arrested and police say he faces a charge of cybercrime.

How common is online fraud?

Last month, police say they rescued a Filipina woman who came to Nigeria in search of romance after meeting a man on Facebook. She was held for six months against her will.

The recent high-profile arrests of two Nigerian social media stars accused of large-scale fraud ended with them being taken to the US where they now await trial.

Police allege they made more than $400,000 from online fraud.

How a 419 and romance scam works