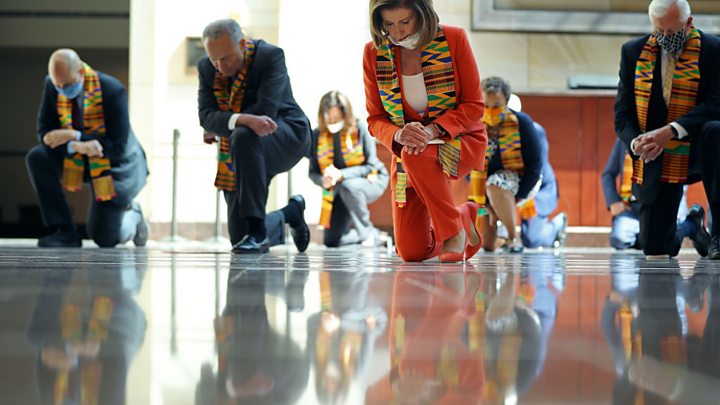 When US Democrats in Congress proposed legislation to reform the police following weeks of protests over the death of African American George Floyd at the hands of a white officer, commenters on social media only wanted to talk about one thing: what they were wearing.

Nancy Pelosi, the Speaker of the House of Representatives, and other Democratic lawmakers were draped in scarves made from a cloth of colourful geometric Ghanaian designs called kente.

It turned out to be quite a controversial sartorial choice.

Why were they wearing it?

The kente scarves were given out to the congressmen and women by the Congressional Black Caucus, according to NBC News reporter Leigh Ann Caldwell.

“The significance of the kente cloth is our African heritage and for those of you without that heritage who are acting in solidarity,” Karen Bass, chairwoman of the Congressional Black Caucus, told reporters on Monday.

“That is the significance of the kente cloth – our origins and respecting our past.”

Members of the Congressional Black Caucus have worn kente at other occasions, including events last year to mark the 400th anniversary of the arrival of enslaved Africans to America and President Donald Trump’s State of the Union address in 2018.

Over the years, kente has been used in the US to reflect a pride in African heritage, including at graduation ceremonies for students in historically black fraternities or sororities.

What is kente and where it from?

Modern kente is characterised by intricately woven and richly colourful geometric designs. You are most likely to see it in bold shades of yellow, blue, green, red and orange.

It is associated with the Ashanti people in central Ghana and is linked with special occasions as it is expensive to make.

Otumfuo Osei Tutu II is the current king, or Asantehene, who ascended to the throne in 1999.

A revered figurehead, he adjudicates in disputes and is closely involved in local issues. However, like other traditional leaders, he is barred by the constitution from taking part in Ghanaian politics.

What has the reaction been?

The word “kente” was trending on Twitter in the US on Monday, prompting laughter from some celebrities.

The drummer for the Roots, Questlove, tweeted his disbelief, saying at first he thought he was being pranked when he was told about it:

Everyone was texting me these Kente Cloth photos, I had to come here to make sure the Roots weren’t pranking me. I just…

The singer John Legend was particularly tickled about how life had imitated art as last month he had taken part in a comedy sketch in the US about Black History Month, which included a satirical song about adding kente cloth to your outfit.

The reaction in Ghana has not been as noticeable, reports the BBC’s Thomas Naadi from the Ghanaian capital, Accra.

Instead, he suspects Ghanaians will be happy with the opportunity to promote the cloth.

However, Kenyan writer Nanjala Nyabola saw the Democrats’ use of kente as an insult to Africans, saying: “We are not your props.”

Stop using Africans and African cultures as props to deflect criticism. We are not your props.

Others in the US complained that talk about the cloth was diverting attention from proposed reforms, with one tweeter saying, “Now is NOT the time to learn the history of kente cloth. I assure this too is a distraction.”

What are the proposed reforms?

The Democrats want sweeping legislation to reform the police in America to make it easier to prosecute officers for misconduct, ban chokeholds and addresses racism.

As she unveiled the bill, Mrs Pelosi read the names of black men and women who have died at the hands of police in recent years.

However, it is unclear whether Republicans, who control the US Senate, will support the proposed Justice in Policing Act of 2020.

US President Donald Trump wrote on Twitter that “the Radical Left Democrats want to Defund and Abandon our Police. Sorry, I want LAW & ORDER!”