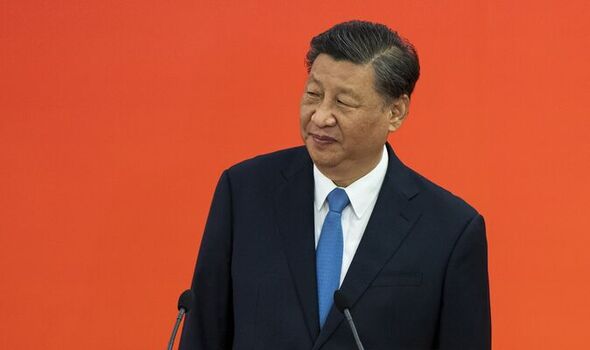 After three days of live military drills, it has been China’s biggest ever show of force both in the air space and seas around Taiwan, which have included the use of ballistic missiles.
The military exercises were in response to U.S House Speaker Nancy Pelosi’s visit to Taiwan last week. Beijing say Pelosi’s visit violated the “One China” principle, with China claiming Taiwan is part of their territory.

Taiwan has a population of 23 million and is located around 100 miles from the south-east of China. But the island is self-ruled, with its own constitution, armed forces, currency and democratically elected leaders. Taiwan’s democratic government sees the island as an independent country, but Beijing claims Taiwan is breakaway province that will one day be “reunified” with the mainland.

China’s President Xi Jinping has warned that “reunification” with Taiwan must be fulfilled and hasn’t ruled out the use of force to make that happen.

Anders Corr, a China expert, told the Daily Express that the drills are not a good look for Beijing.

“This latest near blockade around Taiwan is a larger show of force than previously, and consistent with the massive expansion of China’s military over the past years. Given that it targeted a public personage like Democratic Speaker Pelosi, it is deeply damaging to China’s image.”

China has already slapped sanctions directly on Pelosi and announced it has suspended annual military meetings and transnational criminal issues with the U.S, as well as discussions on climate change.

And economically Beijing has also blocked imports from hundreds of Taiwanese food producers, with thousands of food products now suspended.

Wen Ti Sung, a Fellow Political Scientist at the National Taiwan University (NTU), told the Express that the live drills are encouraging residents to vote for Taiwan’s current ruling Democratic Progressive Party (DPP), which is led by President Tsai Ing-wen.

“In brief, within Taiwan, political implication of China’s live drills is that it is spurring an uptick in civic patriotism.  Taiwan is having its own midterm elections in November and is in the heat of the campaign season.

This surge in threat perception from China will likely spur “rally-around-the-flag effect” that usually benefits the incumbent ruling party, which Beijing dislikes,” he said.

It’s not uncommon for Beijing to showcase its military might when it comes to Taiwan. China’s People’s Liberation Army (PLA) often flies its warplanes into Taiwan’s Air Defence Identification Zone (ADIZ) as a warning to the island.

The number of aircrafts usually increases if Western countries have made a statement supporting Taiwan, or after any politically significant events that links with the island.

According to Chinese-state media, the live drills were scheduled for three days between August 4th to 7th.

But Corr believes the live drills could be the beginning of more hostile acts from China.

“On an almost daily basis, the PLA pulses Taiwan’s air and maritime boundaries with its air force or navy. Any of these missions could spark escalation, including potentially a shoot-down or sinking, if they stray over the line, which many did during this Pelosi crisis.

“We can certainly expect more frequent and intense PLA drills as China’s economic and military power grows relative to the U.S., Taiwan, and allies,” Corr said.