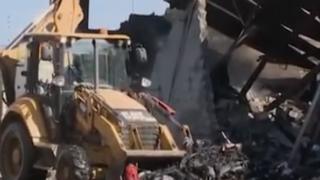 Police in Zambia have arrested three people suspected of murdering three Chinese nationals, dragging the bodies into a factory and setting it alight.

It took place at the Chinese-owned Blue Star clothing factory.

The attack comes amid a controversial crackdown in the capital, Lusaka, on Chinese businesses accused of discriminating against Zambians.

There has also been tension over reports that Chinese factory managers have been forcing employees to sleep at work to stop the spread of coronavirus, the BBC’s Kennedy Gondwe reports from Lusaka.

The Chinese embassy in Zambia said the killings were “appalling and vicious acts of violence”.

Police say the motive for the attack, which took place in the Makeni suburb of the capital, is unclear.

One of those arrested had fled to the city of Ndola some 310km (192 miles) north of Lusaka, police spokesperson Esther Katongo told the state-run ZNBC broadcaster.

For the last few weeks, Lusaka Mayor Miles Sampa has been leading an operation to close Chinese-owned businesses, including barber shops and restaurants, after locals complained about discrimination.

He has also been sharing posts on Facebook, including videos, of his impromptu raids on Chinese-owned factories where workers are allegedly being mistreated.

In one video, he confronts Chinese managers at a truck assembly plant about their policy of detaining workers and orders them to allow the Zambian workers to go home.

Mr Sampa, who is a ruling party member, has not commented on the killings.

He has clashed with the government over his operation against Chinese firms.

However, the mayor has accused his colleagues of not taking seriously the reports of discrimination against Zambians, our reporter says.

According to China’s state-run Global Times news site, Sunday’s attack was likely to have been prompted by Zambians who misunderstood the good intentions of some Chinese firms that have recently been prohibiting employees from going home after their shifts in response to the coronavirus crisis.

“This is interpreted by locals as an invasion of freedom,” the Global Times quoted a Chinese person living in Zambia as saying.

Zambia’s Foreign Affairs Minister Joseph Malanji has sought to reassure foreign investors that they are welcome in the southern African nation.

“This is something regrettable… this is anarchy and this government will not tolerate anarchy,” he said on Tuesday.