The three women say they were tortured, sexually assaulted by state agents but were held for allegedly faking ordeal. 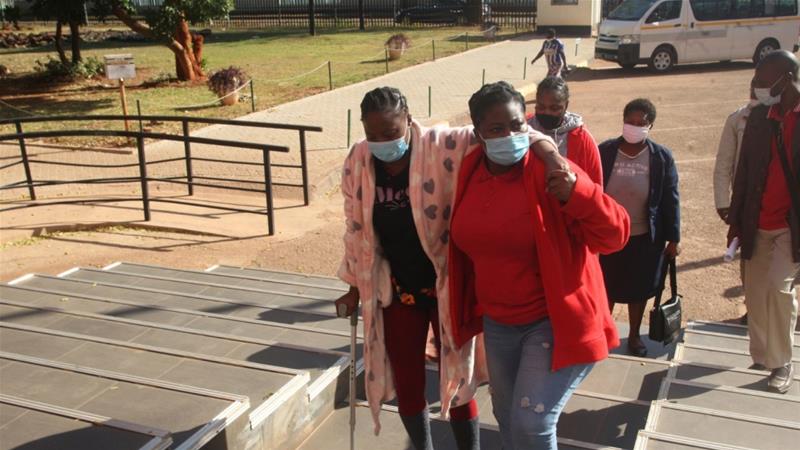 Zimbabwe’s High Court has released on bail an opposition legislator and two activists who say they were tortured and sexually assaulted by state agents but were later arrested for allegedly faking the ordeal last month.

The women – Joana Mamombe, a member of Parliament of the Movement for Democratic Change Alliance (MDC-Alliance), and party youth activists Cecilia Chimbiri and Netsai Marova – were arrested earlier in June from their lawyer’s office.

They were there to discuss another case in which they were charged for staging a protest in May.

The three women were admitted to hospital with multiple injuries after they were arrested in that case, and said they had been taken to a location out of town by unidentified men who allegedly beat them and sexually assaulted one of them.

The court on Friday ordered them to report three times a week to a police station and surrender their passports as part of the bail conditions.

They also cannot “communicate whether directly or otherwise with any section of the public or private media, including social media, in connection with the matter” until the case is over, Judge Davison Foroma said.

“What’s critical is that they have been granted bail. However, we are concerned about their safety,” party spokeswoman Fadzai Mahere told journalists.

President Emmerson Mnangagwa and the minister in charge of police, Kazembe Kazembe, have claimed that the women fabricated the story of their abductions as part of a wider plot to destabilise the government.

The women face a prison term or a fine after being accused of making false statements to police “alleging that they had been unlawfully detained or kidnapped by some unknown people who claimed to be police officers”.

Political tensions are high in Zimbabwe, where inflation above 750 percent is stoking anti-government sentiment.

The High Court dismissed a separate case in which the opposition party is seeking the eviction of a splinter faction of the party which took over its headquarters in the capital, Harare, with the help of security forces.